CHAS Talk: The Kings of Aileach and the Vikings, 800-1060 AD, including the battle between King of Leinster and the Vikings at Cenn Fúait, near St Mullins in 917 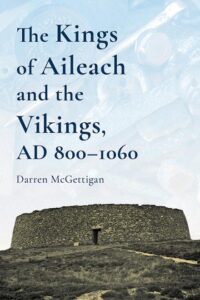 Dr Darren McGettigan will give the April CHAS talk in Leighlinbridge Community Centre at 8pm on Wednesday 20 April. He will talk about the Kings of Aileach and the Vikings, 800-1060 AD, including the King of Leinster and the Vikings at Cenn Fúait, near St Mullins in 917.

From Wicklow Town, Darren has written a biography of the Donegal chieftain Red Hugh O’Donnell, as well as books on the Battle of Clontarf and King Richard II’s two expeditions to Ireland in 1394-5 and 1399.

The CHAS lecture will be based around his latest book The Kings of Aileach and the Vikings, 800-1060 AD, which was published in 2020. The talk will begin with a discussion of the Cenél nEógain kings and the first appearance of Vikings in the north of Ireland at around the same time, beginning with Scandinavian colonization of the Scottish islands, followed by the destruction of the great monasteries of Iona and Bangor by Viking raiders in the early 800s.

Of particular interest to Carlovians will be the discussion on Cenél nEógain high-king of Ireland, Niall Glúndub, may be of most interest to Carlow people. Niall fought the Vikings in the south of Ireland in Munster and Leinster, with his ally the king of Leinster suffering a massive defeat at the hands of the Vikings at Cenn Fúait, which was likely near St Mullins in south Co. Carlow in 917. Niall himself was killed by the Vikings in the Battle of Dublin fought near Islandbridge in 919 AD.

The talk also covers the career of the famous Cenél nEógain warrior king Muirchertach of the Leather Cloaks and Muirchertach’s destruction of most of the Scandinavian settlements in the Co. Down region in the mid-920s. The talk will conclude with an analysis of how the destruction of Scandinavian settlements in east Ulster by the Cenél nEógain kings may have led to the economic isolation of the north of Ireland and may also inadvertently led to the end of the old-style high-kingship of Ireland.

The talk will also be available on Zoom and CHAS Facebook page. Due to a hacking incident at our last online talk, we would ask non-members wishing to view via Zoom to email carlowhistorical@gmail.com for details of Zoom access.