While the Penal Laws ‘are a standard set piece in textbook accounts of the eighteenth century’, it is only relatively recently that Catholics have ‘emerge[d] … not as an amorphous mass of down-trodden victims whose destiny was to endure, but as a group of socially-mobile individuals who struggle[d] … against civil disabilities’ and ‘unmitigated persecution’. With the publication of a number of works with local focus, a picture has begun to emerge of Catholics who not only attempted to, but were successful in employing a number of methods by which they could circumvent a legal code ‘directed so c 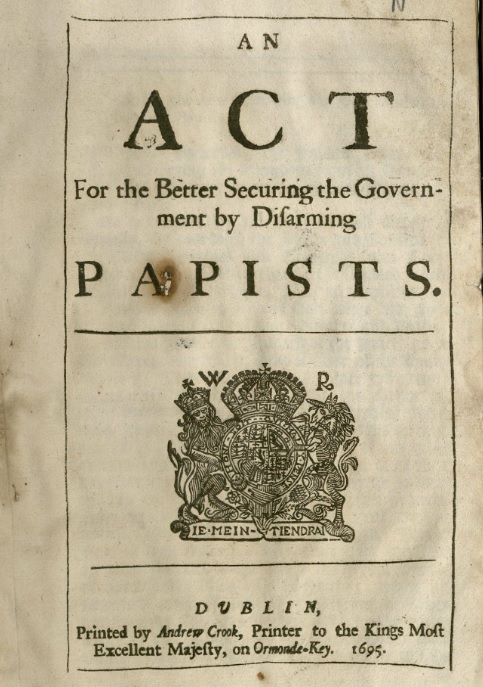 omprehensively at the right of the Catholic to enjoy, inherit and purchase land’, the ‘basis’ of which lay in the 1704 and 1709 Popery Acts which made it illegal for Catholics to purchase land or for sons to inherit their father’s property by primogeniture. Such tactics included conversions to the established religion and intermarrying with Protestant families, as well as granting annuities, manipulating the use of long leases, entering into private trusts and creating settlements to prevent the land being passed on by gavelkind, the latter three approaches relying on some level of collusion with willing Protestants.

However, no matter how carefully arranged, such actions could be brought to the attention of the authorities and the lands confiscated and given to a Protestant discoverer, described as ‘a constant terror to those who sought to evade the law’. Catholics therefore had to take the Penal Laws into consideration for each transaction they made in their everyday lives. Three Catholics, Patrick Lattin, Esq., from Morristown Lattin, Co. Kildare, Michael Moore, a merchant from Drogheda, and Richard Leigh from Cullinmore, Co. Westmeath, all brothers-in-law, were no exception to this, and while they endeavoured to avoid potential problems when purchasing land, there was no guarantee
that the collusive tactics they employed would be successful. Through a case study of these Catholic brothers-in-law, who, in collusion with their Protestant bother-in-law, William Alcock, purchased various properties in Dublin, Kildare and Meath, this talk will detail the legal strategies used by Catholics to screen their illegal land acquisitions during the Penal Laws. The importance of family and social connections, as well as the information regarding family ties that can be gleaned from legal papers, will also be highlighted.

Emma Lyons Bio:
Emma Lyons holds a PhD from the School of History in University College Dublin, where she has lectured in early modern History. Emma held the Research Studentship in Irish History at the National Library of Ireland, cataloguing the Castle Leslie estate papers, and was researcher for the National Library of Irelands World War Ireland exhibition. Her research focuses on the impact of the Penal Laws on Irish Catholic landowning families, specifically the education of Irish Catholic children on the Continent and Catholic landownership in the eighteenth-century. Emma’s book, Morristown Lattin, 1630-1800: the estate and its tenants, based on research for her PhD thesis, was published by Four Courts Press in September 2020, and her article ‘To Elude the Design and Intention of the Penal Laws: Collusion and Discovery in eighteenth-century Ireland – A Case Study’ in Law and Religion in Ireland, 1700-1920 was published in 2021.

This CHAS talk will take place in the Seven Oaks Hotel, Carlow on Weds 18 January @ 8pm. All are welcome and admission is free.

The talk will be videoed for future viewing and will be available on the CHAS YouTube channel: