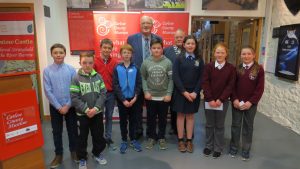 THE winners of this year’s Carlow Historical and Archaeological Society’s National Schools History Project competition had their wonderful efforts and research recognised at a prize-giving ceremony in Carlow County Museum recently.

The competition, which is now in its 12th year, was open to all fifth and sixth-class pupils who live or attend school in Co Carlow. Jim Shannon, one of the judges, said that they were very impressed with the standard of this year’s submissions and congratulated the winners on their achievements and hoped that this would enhance their interest in Co Carlow’s history.

Claiming the top prize this year was Matthew Ellis from the Carlow National School, Green Road, Carlow with his project on St Dympna’s Hospital.

The society also awarded a Best in School Awards to the top entry from schools who did not receive one of the main prizes. That awards went to Oscar Siney, Bishop Foley National School for his project on the old Carlow Gaol; Eoin Doyle, Borris National School for the Borris viaduct and railway; Victor Harkin from Scoil Molaise, Old Leighlin for John Tyndall and Patrick O’Byrne from Scoil Phádraig Naofa, Tullow on Duckett’s Grove.